Italian food has exerted a huge influence on the world of cookery. Many people from all over the world list as their favourites dishes that have their origins in Italy. But Italian cuisine is so much more than lasagne, pizza and spaghetti. Its regional variations are myriad. Many recipes are very simple, but rely on the best quality ingredients. Italian cookery can be simple to learn, but fiendishly difficult to master.

Which is why Masterclass come in handy. They are offering learners the chance to study modern Italian cooking with Massimo Bottura. If you want to know what this titan of the Italian kitchen can teach you when it comes to contemporary cookery from his homeland, read on.

Who Is Massimo Bottura?

Born in 1962 in Modena, Italy, Massimo Bottura is one of the highest regarded chefs in the world at the moment. Bottura is the patron of a restaurant called Osteria Francescana, which is located in his home city and has been listed in the top five by The World’s 50 Best Restaurants Awards since 2010. It has also received excellent ratings from ESPRESSO, Gambero Rosso and the Touring Club guides.

Rooted in the Emilia Romagna region of Italy, Bottura, like many Italians, learned his cooking by watching his mother and grandmother in the kitchen at home. When he was older, he was apprentice to chef Georges Coigny. Later, he would go on to work with Alain Ducasse, after the Frenchman paid a surprise visit to Bottura at Trattoria del Campazzo. Bottura worked at Ducasse’s Le Louis XV restaurant in Monte Carlo in 1994.

In March, 1995, Bottura would take a major step towards establishing the huge reputation that he enjoys today. That was when he opened what is now his flagship restaurant, in the shape of Osteria Francescana. Situated in the medieval heart of the city of Modena, the restaurant aimed to fuse regional tradition with contemporary innovation.

Bottura continued to widen his perspectives as his career progressed. He spent time with Spanish chef Ferran Adrià at the restaurant elBulli. Such work paid off too, as Osteria Francescana was awarded its third Michelin star in 2012. This was just before it reopened, with a new emphasis on avant garde cuisine and contemporary art. Art and design have been almost as important to Bottura as food.

Bottura also owns Francescana 58, which is a more informal dining venue in Modena. This opened in 2011, and was in collaboration with Bibendum director Marta Pulini. In 2014, Bottura opened his first restaurant outside Italy, in the shape of Ristorante Italia di Massimo Bottura in Istanbul, Turkey.

Bottura’s interests in cooking extend beyond the cuisine of his own country too, as he is on the board of directors of the Basque Culinary Centre. He also spends significant amounts of time in the United States, where he works to inform people about the traditions of Italian cuisine.

It can therefore be seen that Bottura is a true titan of the Italian kitchen. So what can you expect to learn if you sign up for the Massimo Bottura Masterclass course on modern Italian cooking? We’ll tell you all about that next.

How Long Is The Massimo Bottura Masterclass Course?

The Massimo Bottura course on contemporary Italian cooking at Masterclass consists of 15 video lessons. The total time for these lessons is three hours 46 minutes, which is pretty typical for a Masterclass course. After the five-minute introductory lesson, the rest of the video sessions range in length from around 10 minutes to almost 25 minutes for the lesson on cooking tagliatelle with ragu. All the lessons can be accessed on your mobile device, which makes managing your time commitments much simpler.

Of course, with a practical skill such as cookery you will need to spend some time practicing the techniques that Bottura teaches. This will extend your time commitments, but you should find it pretty enjoyable to make lovely Italian food, so the extra time will not seem too onerous. It is worth bearing in mind that to get the most out of the course, you will need a properly equipped kitchen. At the very least, some sharp knives and proper cooking pans will be useful.

So what does Massimo Bottura actually teach you on his Masterclass course? We’ll tell you that next.

In the 15 lessons in his Masterclass course on modern Italian cooking Massimo Bottura covers a wide range of topics. It is fair to say that you will need a pretty good understanding of cookery to get the most out of the course, but it is aimed at all ability levels. It begins in typical Masterclass fashion with a short session in which Bottura introduces his career and life.

The course then moves on to cover some Italian classics, in the shape of pesto sauce and then tortellini stuffed pasta. The lessons on tortellini cover both making a broth and sauce, and making the actual pasta by hand. Bottura then teaches you how to cook one of his classics, the Emilia burger, before going over how to make passatelli, the vegetarian ‘broth of everything’.

Topics like breadcrumb pasta, ‘spin-painted’ beets and Mediterranean sole are also taught by Bottura, who is assisted throughout by his sous chef Taka Kondo, who is a more than capable assistant and a reassuringly skilled presence throughout the course.

The highlights of this Masterclass course are when Bottura teaches you to make some real signature dishes, though. There is a particularly enjoyable lesson on making pumpkin risotto, while the tagliatelle with ragu is a little bit more spectacular than your aunty’s spaghetti bolognese. Another  highlight is the lesson where Bottura demonstrates how to make his ‘better than panettone’ soufflé out of leftovers.

The course concludes with two bonus lessons. In the first of these, Bottura conducts a tasting session that highlights the quality of three ingredients that are integral to his conception of Italian cooking: tomatoes, Parmigiano-Reggiano cheese, and balsamic vinegar. The second bonus lesson is another treat. In this one, Bottura teaches you how to cook two signature dishes that are served at Osteria Francescana, in the shape of The Crunchy Part of the Lasagna and Mediterranean Sole.

The course is, as you would expect from Masterclass, a visual treat too. The production values for each video are of extremely high standard, and the way that the food has been filmed is gorgeous. Even if you do not know which end of a kitchen knife to hold, you can still find plenty to enjoy in this course just by watching the lessons.

The Masterclass course on modern Italian cooking taught by Massimo Bottura is certainly a visual treat for anyone who loves Italian food. But it also teaches you how to cook some really special dishes. If you sign up for this course as a single package it will cost £85, or you can subscribe to Masterclass for £14.17 for access to all of their courses. When it comes to Massimo Bottura’s Masterlcass course, we think that that is money well spent. This is great course for anyone interesting in learning about the philosophy and practice of this superb contemporary chef.

Improve your game and beat the best from just £14 per month.
Visit Masterclass 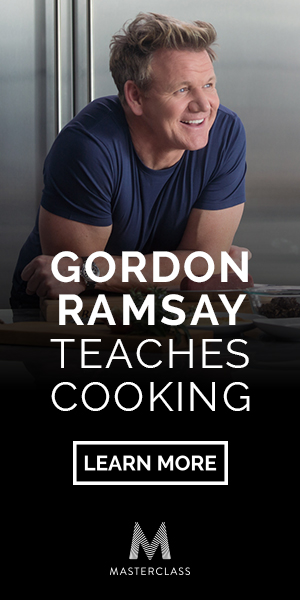